Amongst others, it's William Blake's 251st birthday today. Happy birthday, Will!

From what little I know about him, his unconventional views and unique voice led to him being regarded as either madman or mystic. That alone makes him interesting but, beyond that, I've always admired the edge to his poetry -- the dark shadow lurking -- as well as what he added to the art of the period. To celebrate this day, here's not only a smattering of his words (something other than Tyger, Tyger and Jerusalem) and an image, but also a birthday song from The Beatles.
I Asked A Thief

I asked a thief to steal me a peach:
He turned up his eyes.
I ask'd a lithe lady to lie her down:
Holy & meek she cries---

As soon as I went
An angel came.
He wink'd at the thief
And smil'd at the dame.

And without one word said
Had a peach from the tree
And still as a maid
Enjoy'd the lady.
(1796) 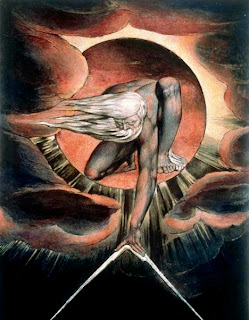 Pity would be no more
If we did not make somebody Poor;
And Mercy no more could be
If all were as happy as we.

And mutual fear brings peace
Till the selfish loves increase:
Then Cruelty knits a snare,
And spreads his baits with care.

He sits down with holy fears,
And waters the ground with tears;
Then Humility takes its root
Underneath his foot.

Soon spreads the dismal shade
Of Mystery over his head;
And the Catterpiller and Fly
Feed on the Mystery.

And it bears the fruit of Deceit,
Ruddy and sweet to eat;
And the Raven his nest has made
In its thickest shade.

The Gods of the earth and sea
Sought thro' Nature to find this Tree;
But their search was all in vain:
There grows one in the Human Brain.
Posted by Paul Burman at 01:10 9 comments: 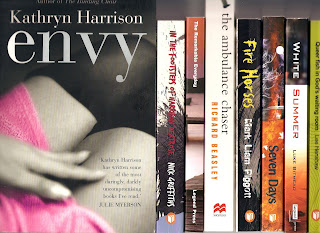 Caught up with a bit of reading recently, particularly during the holiday in Queensland (distant memory that it is). Was keen to get between the covers of the Legend Press titles I bought a few months back. I won't rabbit on about all of them here -- not today -- but must say I enjoyed many of the short stories in The Remarkable Everyday and Seven Days (and will be looking forward to opening Legend's other collection of shorts, Eight Hours, before long). It's good to see a publisher invest in this sort of anthology and I'm never quite sure why so many are reluctant to. To my mind, it can be a tremendously gratifying form and a well-written short story can have as much impact on a reader as a novel. It certainly ain't all about size.
Luke Bitmead's White Summer also hit the right nerve with me. Particularly enjoyed the humour and the voice he created here. A very entertaining yarn (which is, first and foremost, what every novel should aim to achieve) with the added bonus of being set in a locality I once knew.
And I'm just a few pages away from finishing Kathryn Harrison's Envy (Fourth Estate). This is a very sharp piece of writing about sexual betrayal from a haunted/disturbed psychoanalyst's point of view. Whilst the writing can seem introspective at times, this introspection is a significant aspect of Will Moreland's story, and Kathryn Harrison has me convinced that she must have trained in psychoanalysis too, such is the credibility of this aspect of her writing. There are twists and surprises enough in Envy to keep the story moving at a compelling pace, and I'll be looking out for her other titles.
Posted by Paul Burman at 14:26 5 comments:

Following hard on the heels of Barack Obama's victory in America, Thomas Passmore enjoyed a sweet victory of his own: a wonderful review from American-based Kathleen Maher at Diary of a Heretic.
Snuggled comfortably between a poster for Obama and an image of Bob Marley, I don't think he could want better company (see this week's Main Page of Kathleen's Reviews, Memes & Badges site).
I thoroughly enjoyed the way Kathleen crafted this review, and the phrase "he makes a pilgrimage through his past" is, I believe, one of many apt descriptions she's coined for the book. (Thanks.) What particularly pleases me is that The Snowing and Greening appears to be 'translating' well for a variety of readers, from different backgrounds. What more could I ask?
The review is also posted at Cr8Buzz. And, whilst your cruising the net, please visit Kathleen's companion site, where she regularly posts the serialisation of her novel Diary of a Heretic.
Posted by Paul Burman at 20:16 8 comments: