It's Earth Hour this evening, 8:30--9:30. Am counting down the hours. Will blend it with good company, good food (cooked early), good wine and lots of candles.
Also plugging away on Number Two. Hope to have it ready for my publisher by Easter... or a couple of weeks after, perhaps.

A couple of Greek moments 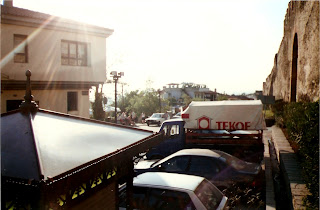 I've noticed that my last two posts at The View From Here have a distinctive Greek flavour to them. Hmm. Interesting. I wonder if there's something I should know.
Posted by Paul Burman at 20:14 2 comments:

Was e-mailed the following recently by one of my lovely nieces in the UK. Love the way that language is used/abused here and the humour that results. Well, it made me laugh anyway... and glad to be out of reach of the National Health Service. Enjoy.

These are sentences actually typed by Medical secretaries in NHS Greater Glasgow
1. The patient has no previous history of suicides.
2. Patient has left her white blood cells at another hospital.
3. Patient's medical history has been remarkably insignificant with only a 40 pound weight gain in the past three days.
4. She has no rigors or shaking chills, but her husband states she was very hot in bed last night.
5. Patient has chest pain if she lies on her left side for over a year.
6. On the second day the knee was better and on the third day it disappeared.
7. The patient is tearful and crying constantly. She also appears to be depressed.
8. The patient has been depressed since she began seeing me in 1993.
9. Discharge status:- Alive, but without my permission.
10. Healthy appearing decrepit 69-year old male, mentally alert, but forgetful.
11. Patient had waffles for breakfast and anorexia for lunch.
12. She is numb from her toes down.
13. While in ER, she was examined, x-rated and sent home.
14. The skin was moist and dry.
15. Occasional, constant infrequent headaches.
16. Patient was alert and unresponsive.
17. Rectal examination revealed a normal size thyroid.
18. She stated that she had been constipated for most of her life until she got a divorce.
19. I saw your patient today, who is still under our care for physical therapy.
20. Both breasts are equal and reactive to light and accommodation.
21. Examination of genitalia reveals that he is circus sized.
22. The lab test indicated abnormal lover function.
23. Skin: somewhat pale, but present.
24. The pelvic exam will be done later on the floor.
25. Large brown stool ambulating in the hall.
26. Patient has two teenage children, but no other abnormalities.
27. When she fainted, her eyes rolled around the room.
28. The patient was in his usual state of good health until his airplane ran out of fuel and crashed.
29. Between you and me, we ought to be able to get this lady pregnant.
30. She slipped on the ice and apparently her legs went in separate directions in early December.
31. Patient was seen in consultation by Dr. Smith, who felt we should sit on the abdomen and I agree.
32. The patient was to have a bowel resection. However, he took a job as a stock broker instead.
33. By the time he was admitted, his rapid heart had stopped, and he was feeling better.
Posted by Paul Burman at 18:50 7 comments:

Voices in my head

The Snowing and Greening written larger!

Ulverscroft have acquired the Large Print edition rights to The Snowing and Greening of Thomas Passmore. It's great news, not least because I have to put some books pretty close to my nose to see the print (!), but mainly because it'll be tremendous to see another edition out there. According to Amazon Japan, where the publication date was first released, it's going to be out this June -- in English, not Japanese ... just seems that amazon.co.jp gets these sorts of details before everyone else... yep, I know I'm rambling. It's been a busy weekend, tied to this computer... probably should go now... 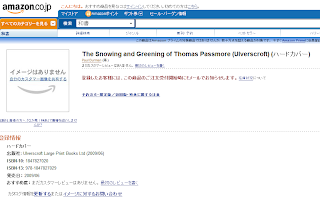 Yeah, I'll use the blog to promote this... 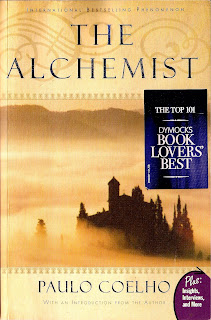 Recently caught up with a book I'd been intending to read for a couple of years: Paul Coelho's The Alchemist. And loved it. Was in the mood for something magical in the way of a fairytale, a folk tale, a parable or the like, and this fitted the bill exactly. Refreshing, wise, entertaining.

Thought I was being very perceptive in finding a similarity in tone to Antoine de Saint-Exupéry's The Little Prince (an old favourite), until I discovered a reviewer had been cited on the back cover declaring something very similar. Oh well, guess that just reinforces the point: If you liked The Little Prince, there's every chance you'll get a kick out of The Alchemist too. 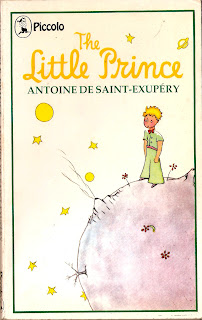 Some great desk shots beginning to happen. And Mrs T has revealed the source of my confusion about an earlier Desk meme: it wasn't a meme about desks but a book tag that "went disasterously wrong". Anyway, as promised, here's the link to that post, and links to Gary Davison's posts featuring his two desks: his writing desk (where his novel Fat Tuesday was conceived, perhaps) and his business desk. And wait, there's more: a link to Psychotic Rambling's desk space. Love the postcards and pics that surround this one.

Mrs T. has since revealed that she tidied her desk for that original photo and that it doesn't usually bear any resemblance to the way it appeared. I've even seen a photo of what it really looks like and... she's right. It's unrecognisable as a desk. Whilst this smacks of something akin to false representation, I think she might redeem herself if she fesses up and shows the world what her desk really looks like. That's the challenge, Mrs T.

Anymore desk shots out there?
Posted by Paul Burman at 20:54 3 comments:

While following through on a reference I wanted to use in Number Two -- was looking for a performance of Little Red Rooster by Muddy Waters -- I came across this tremendous Howlin' Wolf version and one by The Stones. 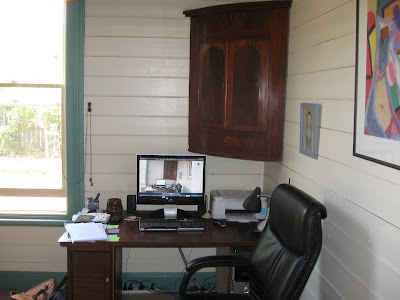 Many, many months ago, there was a meme inviting interested bloggers to post a piccy of their desk space. I have a feeling the one I saw was a Mrs T. post, but I've been unable to find it so can't be sure (but will link back to it if Mrs T points me in the right direction). All the same, it seemed a good idea and something I've been meaning to reciprocate for a year or so -- however long it's been.

I spend a lot of time at this desk, usually staring out the window at the ravens ripping pears off one of the trees, or playing with words, so it's an important space to me. As you can see, Post-Its are a key tool in my writing process, and I usually scribble on these at three or four in the morning and then spend a couple of weeks trying to decipher what I wrote. I made the brown lop-sided pot when I was about 10 and my grandmother gave me the old marmalade container which I've kept pens in ever since. I salvaged the timber for the desk from an old Science classroom in the UK. The builders were going to burn it, which seemed sacrilegious, so I bought it for a couple of bottles of beer and turned it into a desk. The chair swings and tilts in all the right ways, having learnt that I like to dance while I write... to Emilie Simon, DaftPunk, Ben Harper, Bob Marley... whoever.

How about picking up on this meme yourself? Just don't leave it for 12 months!