Concord and A Black Joy

According to Jacques Barzun, 'Art distils sensation and embodies it with enhanced meaning in memorable form - or else it is not art.'

Must be why I head to Melbourne every once in while, to savour some of that distillation in one flavour or another. Enjoyed Concord, a contemporary ballet performance last weekend, which made Barzun's quote particularly apt. Many of the images created by the Spanish choreographer Nacho Duato in Por Vos Muero are still floating around in my head.

It's all grist to the mill... or over at the Factory of the Imagination.

Thought I might also plug A Black Joy today, which will be showing in that fine city soon, and because I'm delighted to know one of the cast. Also because I like the magazine spoof that's doing some catchy promo work for it. So, if you're in Melbourne between 24th September and 4th October, and you enjoy a good black comedy... 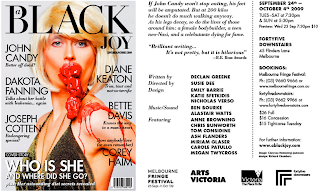 Thumbs up to Scott Pack and Juana Molina

Thumbs up to Scott Pack (ex-buyer for HMV and Waterstones, currently publisher at The Friday Project) and a man with fine literary taste. Over at his blog, Me and My Big Mouth, he had this to say about The Snowing and Greening of Thomas Passmore:

"An intriguing set up, a great title and a strong cover. Not sure if any book chains promoted it but they should have done, it is rather good."

While I was filching this quote from Scott's site, thought I might as well filch this YouTube video too. Noticed Juana Molina sitting there a couple of weeks ago and, while the music and her approach to creating it certainly won me over (have a look at her website), the video blew me away. Reminded me of an Hieronymus Bosch character chirruping away - somewhere this side of Hell. A sprite at best. 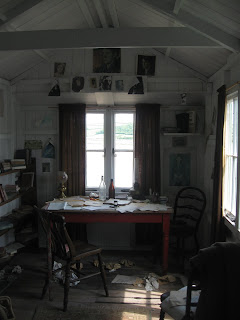 After Gary D requested a pic of Dylan Thomas' view when writing in Laugharne, Mike K. asked if I had a pic of Thomas' writing shed. Couldn't find one amongst the 1800 photos (!) that we took and then I remembered why: because it just looks like an old shed. The Trust that looks after the property has done up the inside and put up a glass viewing screen though, so in the event I took one photo of this little temple. Authentic Dylan Thomas scrap paper? The poet having an off-day? Or a few props to add ambience? Did Thomas really have portraits of D.H.Lawrence and others up in his writing pad?

Still kipping down at Gary's blog off-and-on, and provided a few brief answers to questions about writing while I was there.

Over at Gary's, I mentioned The Herd - an interesting Sydney band who don't mind using their songs for a bit of political clout, and good on 'em too. Here's a couple of songs that their label, Elefant Traks, uploaded to YouTube. The previously mentioned The King is Dead and 2020. Get dancing.

The view from Dylan Thomas' house

In response to my last post, Gary Davison (of Fat Tuesday and Streakers fame) asked me to post a pic of the view Dylan Thomas might've had from his house - what scene he'd be able to stare at when he was writing. I've (roughly) stitched a couple of shots together, taken from the path above his house, to try and capture this view. A stunning estuary. Although, when Thomas and his family lived there, coal was apparently delivered to a small dock right next to where his garden would've been. He had a shed about 100 metres further down the path, which he used as his main writing studio, and this can still be seen today, with pretty much the same view.

Talking of Gary D., he invited me to write a couple of pieces for his blog, so I'm a guest there at the moment. The first item was a hypothetical: what I'd say if I met six (specific) famous people. He's posted this recently (but added a few photos of his own and a couple of comments too - Thanks, Gary!). The second will be a few comments about writing, and the third will be the opening lines for his next short story competition. See you there.


Was reminded recently that the good folk over at PaperBooks are having something of a Summer Sale at the moment. All titles in their online shop (click link above) are currently half-price. They also offer a free book to anyone who sends in a photo of a PaperBooks title being read on holiday. And, what's more, there's a special 'Word of Mouth' offer in the back of most titles...

Can't say they're not doing everything possible to make buying PaperBooks' books easy.

As I write this, and by way of acknowledging the recent bicentenary of his birth (6th August, 1809), I'm listening to a program that celebrates the work of Lord Alfred Tennyson. Happy birthday, Alf! To Strive, to Seek, to Find and Not to Yield is the latest broadcast in BBC Radio 3's Words and Music series (available on podcast here until Monday 17th August, 2009).

The show presents an eclectic range of readings and music in a manner that adds new meaning to the Poet Laureate's work, ranging from Billy Bragg singing Blake's Jerusalem and Van Morrison singing Don't Worry About Tomorrow to Dvorak's Song to the Moon from Rusalka and a portion of Verdi's La Traviata. Interspersed with this music are words from, amongst others, Dylan Thomas (an all-time favourite of mine: Do Not Go Gentle Into That Good Night), Kathleen Raine, Marvell, Robert Frost and, of course, Tennyson himself.

The producer of the program, Elizabeth Funning, notes how she ended up exploring "ideas of decision, change, seizing the day, and fighting the inevitable." Serendipitous this, as I was watching, Pleasantville the

other night, for the ten thousandth time, and still enjoy how it explores and responds to exactly those ideas - universal themes which come to the fore every now and then in music, literature, film, art, and which I'll chew over for a while longer, I think. Anyway, this has made listening to Words and Music all the more enjoyable.

Talking of Dylan Thomas, went on a mini-pilgrimage to Laugharne and Thomas' stamping ground when I was in Wales recently. He was one of the first writers I got hooked on when I was at school - loved the lyricism of his short stories and Under Milk Wood, of course, and it had a lasting influence on me, I think... I reckon... maybe. 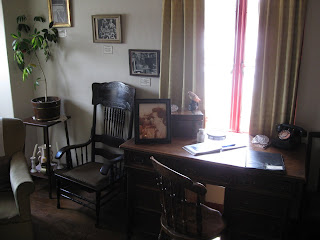 Have been working on a couple of creative non-fiction articles across the last couple of weeks. Thought it was time to challenge a different part of my brain for a while. Hmm. A different way of thinking. Hope it doesn't foment a Work-To-Rule down at the Factory of the Imagination. 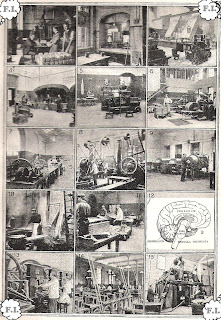