Bell Shakespeare began their tour of Molière's The School for Wives at Warrnambool's Lighthouse Theatre last night, and it was brilliant.

Translated from the French by Justin Fleming, I initially thought I'd tire of rhyming dialogue if it extended beyond the first scene, but the script was excellent and the actors' delivery so well-timed that it proved to be an essential comedic element throughout.

Originally written in 1662, this adaptation was set in the 1920s.  It tells the story of Arnolde, a wealthy middle-aged man who, years previously, bought a four-year-old girl, with the intention of having her raised in a convent to become his grateful, adoring, guileless wife.  Unfortunately - or fortunately - as the prospect of their marriage draws closer, he unwittingly assists a young rival (Horace) to compete for the affections of Agnes, who is far less stupid than Arnolde would prefer.

John Adam (Arnolde) barely left the stage for 2½ hours and gave an outstanding performance - he must have been exhausted by the end of it - but was supported by a superb cast*.  The stage design (Marg Horwell) was imaginative, ingenious and entertaining in its own right, and the direction by Lee Lewis was faultless.  I loved the visual jokes, the use of music, and particularly the bawdy humour.

One of the most memorable lines came from Georgette, Arnolde's maid, who outdoes herself in proving to her master her ability to insult:
"May your ears turn to arseholes and shit on your shoulders."
I'll keep that for a suitable occasion.

A standing ovation to Molière, Justin Fleming, Lee Lewis and the cast of The School for Wives. 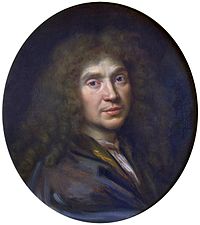 Jean-Baptiste Poquelin a.k.a. Molière - portrait by Pierre Mignard
Posted by Paul Burman at 19:55 No comments:

Walking the beach in the early-morning half-light of winter; the shortest day of the year.  After a night of light rain, the air is moist, but the sea is calm and the sand has been licked smooth by a receding tide.  From a house beyond the dunes, drifts a breakfast of wood-smoke. 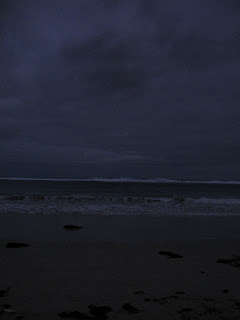 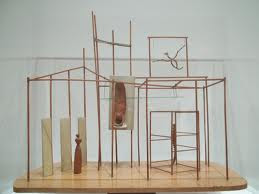 Number Three is almost wrapped up.  The end is in sight!
There's two scenes to finish and a couple of edits to work through, but then it'll be done.
Was hoping to have got there last November, but I'll settle for this July instead.
Although its working title was The Palace at 4am, after Alberto Giacometti's sculpture, I knew I had to ditch this a while ago, when the members of a Book Group assumed it must be about the royal family, which it most certainly ain't.  I was a bit disappointed because that title had been kicking around in my head for a long, long while, and the sculpture encapsulates, for me, the abstract, other-worldliness of the time of night when nothing seems quite real anymore and when, sometimes, we do strange things... which is a bit more pertinent to what it's about.
Never mind.
I just couldn't find a suitable alternative for a few months and didn't much like working without a title during that period, because it helps shape the focus of a story for me.  But then a new title arrived, slowly, in two halves, and I found the focus again.

Funny things, titles. They create all sorts of expectations.  Which is why I remain a little coy about them until they're actually printed on a dust jacket.

Went to see The Avengers at the cinema a few weeks back.  Everyone was raving about it and, being a fan of the 1960s TV series, I couldn't wait to see how it had been remade.  Thought I'd be in for a trip down Memory Lane.  Was a bit surprised, then, when the opening scenes introduced a batch of Marvel Comic characters - the Incredible Hulk, Fury, Iron Man, Captain America, et al -  and no sign of John Steed and Emma Peel.  Different avengers!  Oh well, it was still a fun movie.

This weekend sees the the beginning of Port Fairy's annual winter weekend celebrations.  It's pretty damned cool and wintry-looking out, and good to have as many excuses as possible to dive indoors, look at paintings, listen to music, drink a glass or two of wine... well, here's the program. 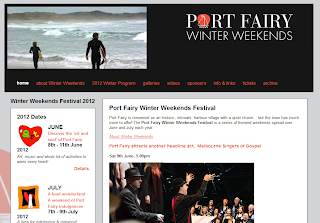 The Biblio-Art Exhibition at Blarney Books & Art will be launched and judged by painter-sculptor-printmaker David Frazer.  (Painting provides an occasional diversion from writing for me and Up, Into the Singing Mountain is my contribution to this exhibition.) 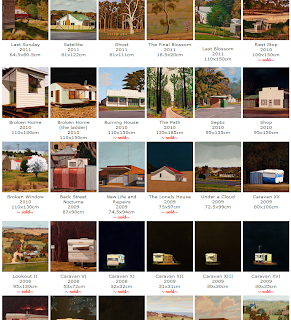 Karen Richards, who took away the Biblio-Art honours last year, recently made this short Secret Forest movie using some of her machine-embroidered lace creations.  Pleasantly spooky.

On my way here, I noticed that page views for this blog are about to hit 20,000 - well, sometime in the next couple of weeks.  Can't be bad.  So, by way of spreading a little of the love - or is that 'lurve'? - thought I'd recommend a couple of blogs I haven't recommended before, but wherein I guarantee you'll discover some pretty damned fine writing.

I've been a regular visitor to one since the beginning of the year, when a young friend confessed she was blogging.  Since then, her blog has accompanied her travels around Europe, while many of us have tagged along with her words.  It's witty, astute, well-crafted writing, and can be found at: http://palindromeiam.wordpress.com/ 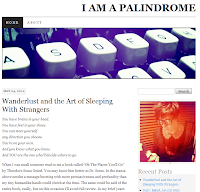 I was pointed in the direction of the other site only yesterday (thanks, Rhianna), but liked it so much that I hung about to read every short story, vignette, article and snippet that Howard McKenzie-Murray had posted there.  I particularly enjoyed the Foreign Correspondent pieces, but even the By-line and Biography are deftly written and worth lingering over.  You'll find yourself over In My Little Country of Long Summers very smartly if you click here.