Number Three is all but finished.  Arrived at that magical moment yesterday - that point where you realise the words are in place, the story's been told, and anything else will be too much.

I'll leave it for a while now, maybe a few weeks, before casting a fresh, critical eye over it, to see what can be pared down or sharpened up.  Will get a couple of reports from critical readers too.

In the meantime, and before I start grappling with Number Four, there's a short story or ten, I'd like to write, and I have to finish redesigning the website.  Maybe a bit of painting can be fitted in as well.  Ooh, so much to do.

By the by, I didn't realise it was the bicentenary of Charles Dickens' birth this year.  Apparently there's a global program of events under the banner Dickens 2012.  I was lucky enough to hear a lecture by Adrian Wootton (chief executive of Film London), at Melbourne's Wheeler Centre last week on the Life of Dickens.

While I'm not a huge fan of Dickens' novels - have read quite a few, but have grown weary of the style - I must say that Adrian Wootton's presentation reinvigorated my interest, and I may well return to reading one or two more before long.  Maybe I'll revisit Great Expectations, which was always my favourite.  The last one I read was The Mystery of Edwin Drood, which, as I discovered at the end, was a mystery because Dickens inconveniently died before he finished writing the thing.
Posted by Paul Burman at 10:20 5 comments:

Siân's exhibition opened in style with about 55 people attending and 4 paintings sold on the night - good company and great fun.

Here's a couple of compilation photos, showing some of the 28 recent works that comprised the exhibition Light, Life. 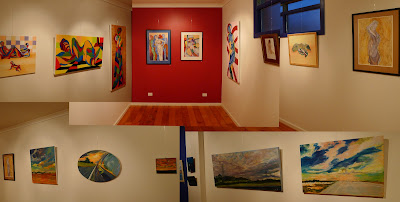 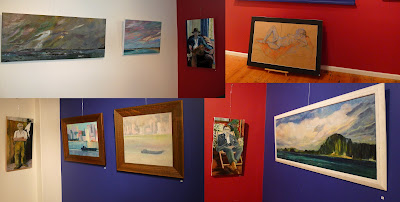 A shout-out for Kathleen Maher and 'Underground Nest', currently available free on Kindle

I'm delighted to announce that American author Kathleen Maher, who I've worked with at The View From Here, has not only had her novella, Underground Nest, published as an ebook this month (Beekman Press), but that it's currently free from Kindle.  I've just downloaded it myself, and here's the blurb:

Underground Nest is a brisk and comic tale of deceit and comeuppance, about a philandering Scoutmaster who meets his match in a powerful woman. Zachary Severins lives by the Boy Scout Code, except when cheating on his wife and clawing his way up the career ladder at Columbia University. Upon meeting Vida Korbett, whose calculating ambition equals his, Zach’s sure-footedness begins to slip.

Here's The Link to the free download, and here's Kathleen's online profile. 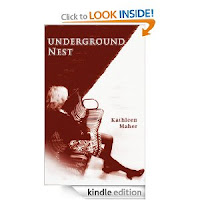 Having tried out the Kindle for about three months now, I'll be writing about that experience (and some of the books I've downloaded) before too long.
Posted by Paul Burman at 21:05 3 comments: