After 57 years of living in the same house, my parents recently moved; a different town, a different county.  (Good on 'em.)  As part of that process, they had a massive sorting out, which resulted in my mother sending me a book that played a role in both her childhood and mine: Albert, 'Arold and Others, written by Marriott Edgar and published by Francis, Day & Hunter Ltd of Charing Cross Road, London.  There's no date in the book, but I gather it was released in 1938 or 1939.

As a kid, what I loved about this book was its black humour and the fact that much of it was written for a Lancashire working-class accent.  What I particularly liked was that, in The Lion and Albert, young Albert, when visiting the zoo, gets eaten by Wallace the lion, and his parents are peeved for the wrong reasons.  It was one of those books I never tired of, and I wonder whether the books we read as children shape what we read (or write) as adults, and whether they shape us in other ways too.  What do you think?

The manager had to be sent for.
He came and he said "What's to do?"
Pa said "Yon Lion's 'et Albert,
And 'im in his Sunday clothes, too."

Then Mother said, "Right's right, young feller;
I think it's a shame and a sin
For a lion to go and eat Albert,
And after we've paid to come in."

The manager wanted no trouble,
He took out his purse right away,
Saying "How much to settle the matter?"
And Pa said "What do you usually pay?"

I had three other favourites from this time, which are still on my bookshelves: Emil and the Detectives by Erich Kastner (I read this seven times, so possibly wasn't a particularly adventurous reader), The Story About Ping by Flack and Wiese, and The Otterbury Incident by C.Day Lewis.  Comics and annuals were part of my literary world too, but these had a much shorter shelf life, and I borrowed Enid Blyton's Famous Five adventures from the library on occasion. 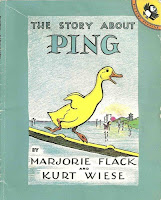 To this day, I love kids' books, and relished that part of parenthood when there was a ready excuse to start buying and reading them all over again.  The cupboards and bookshelves are crammed with these too, and it's good to take them out and read again every once in a while.  I have many, many more favourites amongst them, but that's another story.

There's been a fair whack of writerly stuff written around the traps these last few days.
Posted by Paul Burman at 21:04 No comments:

Alleluia! After three disappointments, I finally found a book I could enjoy: Jim Crace's novel Being Dead.

Seriously, I was beginning to think there was something wrong with me.  Perhaps I'd got so caught up in my own writing that, when searching for something in the fiction of other authors - some sort of escape, some sort of enchanting surprise, some sort of entertainment - I'd unwittingly doomed myself to being forever disappointed.  As if I might, stupidly, be searching for the book I wanted to write.  But, no, I just had a bad trot, that's all, and Jim Crace proved it.  Cheers, Jim. 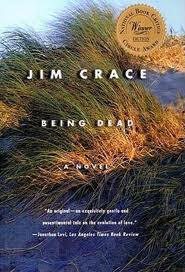 I must confess that I hadn't read Mr Crace before, but the quality of Being Dead is such that I'll soon be ordering a couple of his other titles (Quarantine will probably be one, as this took the 1997 Whitbread Award and was short-listed for the Booker Prize of that year).

It might sound depressing, but it's not.  It's lyrical, imaginative and engaging from start to finish.

On Baritone Bay, in mid-afternoon, Joseph and Celice, married for almost thirty years, lie murdered in the dunes.  The shocking particulars of their passing make up the arc of this courageous and haunting novel.  The story of life, mortality and love, Being Dead confirms Jim Crace's place as one of our most talented, compassionate, and intellectually provocative writers. (Picador edition)

In finding out a little more about the author and the novel, I came across a fine blog, The Age of Uncertainty.  You can read more about Being Dead, Jim Crace, and much more besides, here.
Posted by Paul Burman at 21:42 No comments: 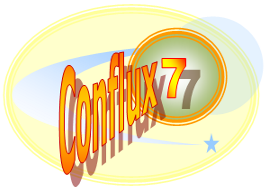 Speculative fiction ain't fully my thing.  Nor fantasy.  Not yet.  They might be if there were more hours in the day, and at some point in the future I might want to make them more my thing, but for the time-being I'm happy doing what it is I do - whatever that is.  However, recently heard about Conflux and, seeing that I'd never heard its name before, thought I should find out and share.

Conflux is an annual Speculative Fiction conference held in Canberra and, from what I gather, has grown from a rich history of 50+ Science Fiction conferences.  It's got all you'd expect to find at a literary conference - guest speakers, discussion panels, workshops, author readings, book signings, wining, dining and networking - and more...

Under the 7 FAQs at the Conflux website, I thought this an interesting, if not telling inclusion:

What is the Weapons Policy?
No weapons are to be brought to, worn or carried at any time during the convention (including water pistols, real or replica guns, swords or knives), unless approved as part of an official event. Only the convention organisers may approve such weapons and their participation in any event.

Tracked down some answers at Talie Helene's spot, where it's revealed on a promo video that dress-up banquets have featured for the last five conventions - Medieval, Regency Gothic, 1920s New York, Southern Gothic, On board the Graf Zeppelin (hmm).  There's a Conflux Cookbook, written by Dr Gillian Polack, to celebrate these.  Talie tells more about her time at this year's banquet (and describes a bizarre conversation she had) close to this spot.

Weapons?  Why wouldn't you bring a sword to a Medieval feast?  Although might be a little awkward on a Graf Zeppelin hydrogen airship.

Alan Baxter was a guest at this year's Conflux (with or without weaponry), and you can get a flavour of workshops by looking at his schedule here and his report (with pics) here.

Reckon I've sold myself on this now.  Will be signing up before long.

Down at the Factory of the Imagination in September

Although I'm only about 20,000 words away from the end of Number Three, I haven't added a single page to the manuscript during September.  This has been a deliberate and liberating decision.  Instead, apart from editing the first few sections of the novel - demolishing redundant words and sentences, building pace, strengthening impact - I've spent most of the month thinking about writing.
While this may sound wanky, it's an essential part of the writing process for me.  It's what I do before I start writing, but I also like to punctuate the process of writing - when everything's going reasonably well - with taking time out from committing words to the page and simply thinking about writing instead.  Not only does abstinence make me hungry to write again, to get back to the characters and their stories, but in distancing myself from them for a short while, I find I can think about them afresh.  If I do a little editing at the same time, visit a gallery or two, get hooked into some new music, read a good book, watch a few films, then new ideas start fermenting, and though I might not be adding dialogue, narrative or description to the novel, I end up scribbling lots of notes and with a stronger sense of what I'm writing - and how.  New layers reveal themselves, extra dimensions to the characters become apparent, I see opportunities I'd missed before.
That's where I'm up to.
Posted by Paul Burman at 11:25 3 comments:

I've been on the road these last few days; driving through thunder, lightning, flash floods, aquaplaning towards concrete crash barriers, sitting in traffic jams, waiting for delayed planes - that sort of thing.  Not doing a lot of writing, but taking the opportunity to catch up with reading and with simply thinking about writing (a worthwhile thing to do at times), but I'll say more about that in a future post.

What I want to do here is give a shout-out or two, by way of celebrating just some of the good stuff that's happening around the writing community.

To Louise Cusack, who signed a three e-book deal (or is that threee-book deal?) with Pan Macmillan's digital publishing subsidiary, Momentum Books, to re-release her fantasy trilogy, Shadow Through Time, to the international market.

To Mike French, whose debut novel The Ascent of Isaac Steward (Cauliay Publishing), was waiting on the doorstep for me at the end of my journey, after a bizarre journey of its own (Amazon failed to send my pre-ordered copy, Fishpond spent two months losing the copy I requested from them, and then told me last week it was no longer available and so wouldn't be sending a replacement copy... but managed to post it to me on the same day).  Likened by R.N.Morris to "the surrealist literary experiments of James Joyce's Finnegan's Wake but blessedly readable", I'll enjoy starting it soon.  Big CONGRATULATIONS to Mike too for being long-listed by the Galaxy Book Awards under New Writer of the Year category.

To Cam Rogers, whose claim that Fight Club is one of the "best zombie films ever made" got me thinking about this favourite movie in a whole new light.  He presents a weirdly convincing case.

To Jay Kristoff, who tapped into my doubts about the value of tweeting and had me cheering at the same time, with his Ten reasons you can Follow THIS.

To Dmetri Kakmi, whose article on why Australia's constitution should be rewritten to recognise the country's indigenous inhabitants has had me wondering if a group of writers couldn't harness the net to make this happen.  Or whether this is something that Avaaz might be prepared to take on.

And I have to stop there, so you can check out the links.  There's so much good stuff happening at the moment.  This is just a flavour.
Posted by Paul Burman at 21:17 1 comment: