Magdalena Ball (of Compulsive Reader fame, and author and poet in her own right) made my day last Tuesday when she listed The Snowing and Greening of Thomas Passmore and Carlos Ruiz Zafón's The Angel's Game as her two favourite books for 2009.  Nice one.  Thank you. 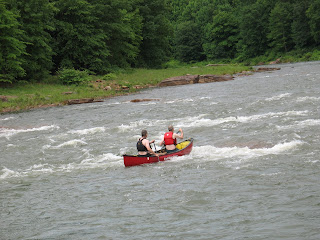 It's been a very good couple of weeks in that respect, and so I thought I should knock myself down to size a little by sharing a couple of photos that captured one of my adventures in America last year.  Here I am, after canoeing some of the way down the west branch of the Susquehanna River in Pennsylvania, having been persuaded to head back upstream in order to tackle that bit of white water head-on.  Surfing against the current in a canoe almost always, in my experience, guarantees a good soaking. 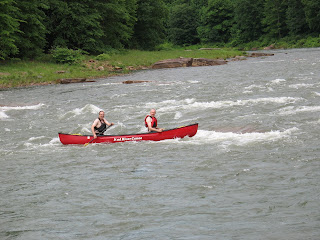 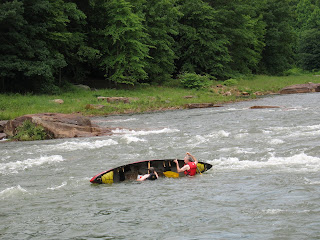 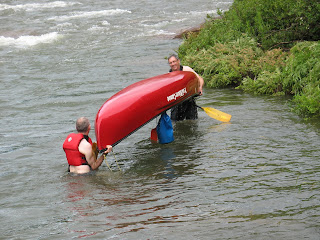 And, while I'm at it, the friend I'm paddling with here doesn't confine his outdoor interests to canoeing, but is also an accomplished skier.  If you're interested in cross-country skiing, check out his website (http://www.crosscountryskipa.com/)and his blog. 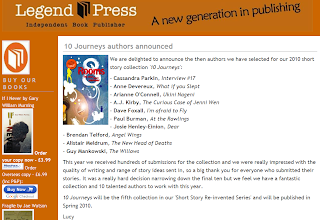 Okay, Legend Press have announced it.

At The Rawlings' Place will be one of the ten short stories in their spring anthology, which I'm delighted about as I had great fun writing it.

It's a dark little tale, for sure, but I won't say any more than that... not yet.

Good news on Friday, with the 8000 word short story I was working on last September being taken up by a UK publisher for an anthology (of ten stories) that'll be published in April (all being well, fingers crossed 'n' all that).  I won't say any more about it at the moment as I don't want to steal the publisher's thunder, but it made my day.

That'll make 2010 a two-book year with novel Number Two due to come out at some point (all still being well, fingers and toes crossed very tightly 'n' all that).  Again, I'm going to keep the title to myself until the publisher has announced it.  But once that's happened, I'll get the trumpets out - I'll get the whole bloody band out!


Other good news yesterday when Siân and I went to the opening of an exhibition of work by Laurie Collins at the wonderful Blarney Books & Art, where several of Siân's paintings are being exhibited at present.  In we walk to the news that one of her paintings had just been sold.  Nice one.

Thoroughly enjoyed Laurie Collins' sculptures too, so well worth a look either at his website (which doesn't quite do his work justice) or, if you happen to be in Port Fairy, at Blarney Books & Art.

In other, late-breaking news, the Opportunities page I've been working on recently is now 'live' over at The View From Here.  Apart from publicising a global range of competitions, awards and opportunities for the literary community, there'll be a weekly profile of a publisher (and what they're looking for in terms of submissions) or a conference or a festival or summat - something, I hope, for writers of all styles and tastes.

As we track pictures of record snowfall in Europe and North America, down here we're having a heatwave.  It's 40°C at the moment and rising.  I was about to load Marilyn Monroe singing Heat Wave, but I did that last year - shortly after posting a blog about the New Zealand boat Earthrace, which (as the Sea Shepherd's Ady Gil) has just been sunk while protecting whales (see article).


At the moment, I'm working on a reasonably long short story I've been wanting to write for a couple of years and finalising (I hope) the rebuilding of my website www.paulburman.net.  It's looked tired for a while and I've been trying to learn the different software that'll wake it up and make it more dynamic.  That's the plan, anyway.  Hope to launch it soon, fingers crossed.  Then I must get back to number three novel - my main project for 2010.

Given that there's a sense of familiarity about things at the moment, here's a rendition of Heat Wave... by the Muppets.

Feasts for the Senses - Reading and Listening 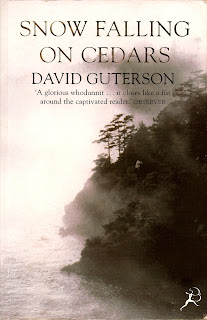 Enjoyed reading Snow Falling on Cedars by David Guterson recently (Bloomsbury).  Saw the film a few years back and liked it well enough, but only just got round to reading the actual novel - shame on me.  Set in the Pacific north-west of America, against the backdrop of a dramatic winter storm and the tension of a murder trial, Guterson uses Third Person Omniscient (rather than the more familiar Third Person Limited) to create a large cast of wonderful characters and to tell a broad range of overlapping stories.  While these ultimately return to the death of Carl Heine and the trial of Kabuo Miyamoto, each is a wonderful and significant story in itself.

The description is rich and evocative - immensely satisfying:

Ishmael's mother had the woodstove in the kitchen going - he could see the smoke rising thick from the chimney, a ghostly white against the hard-falling snow - and was standing at the sink in her overcoat and scarf when Ishmael passed in front of her window carrying his can of kerosene.  A fog of condensation had formed on the inside of the pane, so that her image appeared to him as a kind of silhouette, a vague impression of his mother at the sink, refracted and fragmented, a wash of colour.  As he passed by, peering through the window mist and snowfall, he saw her hand work with sudden clarity to wipe a circle of the pane dry, and then her eye met his and she waved.  Ishmael held up the can of kerosene, still moving steadily toward the kitchen door.  His mother had shovelled clear a path to the woodshed, but the snowfall was already covering it.  Her shovel stood propped against the fence railing.

I've also enjoyed listening to a fair bit of C.W. Stoneking, Charlie Parr and Sarah Blasko recently.  C.W. Stoneking, a contemporary Australian blues musician with an American heritage, creates a wonderful retro blues sound and performs the role with panache.  Here's an extract from Jungle Blues, followed by his cover of White Stripes' Seven Nation Army, recorded for Triple J.  Great fun - the band has an absolute ball - have a look at these in Full Screen.