Good to see the imminent release of The Grease Monkey's Tale announced on the Legend Press/PaperBooks website last week.  The current release date is June, although I know these things can change.  The next bit of excitement will be the cover designs, when they're ready.  And before long, all the anxieties will kick in.  Until it's on the shelves in book-stores and at least one person has read it and said they enjoyed it, I'll be like that shivering, old boat at the bottom of the sea: a nervous wreck.  But excited at the same time.
I'm working on Number Three and Number Four at the moment.  They're completely different to one another in mood and outcome - opposites in many ways, as The Grease Monkey's Tale is also opposite to The Snowing and Greening of Thomas Passmore - but I enjoy working that way: a couple of hours on one and then a couple of hours on the other.  It keeps me reasonably balanced, almost sane, and means there's always something I want to write.
Also working behind-the-scenes on The View From Here's Opportunities page.  Am enjoying getting in touch with publishers and literary agents, and getting a first-hand view of the "industry" from their perspective.  Interesting stuff.

Reading 8 Hours at the moment.  One of Legend Press' excellent anthologies of short stories.  Talking of which, it's only a few weeks before At the Rawlings' Place will appear in the next anthology of long-shorts: 10 Journeys.  Hmm, more excitement. 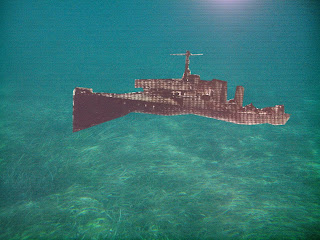 Have taken the last week off from writing projects.  It's been a sociable time this Easter break, but has also given me a chance to catch up on a couple of jobs.  Mainly, the building of another set of bookshelves - before we have an avalanche of stacked books - and developing my new website. 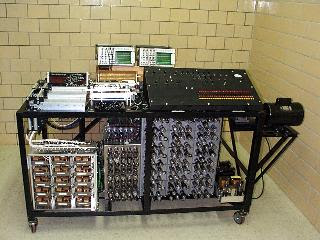 I've been tinkering away with the new website for months and don't bother linking to the existing site any more because it looks way too clunky.  The new one has involved learning Flash, Fireworks, Dreamweaver and improving my poor understanding of Photoshop.  Anyway, the last week has given me a chance to hunker over the PC, develop some serious neck strain and bring out the inner nerd in me.  Yesterday, I got very excited at discovering how to create an animated button in Flash.  Whoopy-doo!
It'll still be a few weeks (at least) before I complete the site, I reckon, because I want to get it just right, but I'll have my own geeky launch and a party in digital wonderland when I do.
Painting (as in painting and decorating) isn't a job I enjoy.  I get bored.  And hate the smell of oil-based paints.  Whenever I can't put this off any longer, I find that I listen to the same 2 or 3 albums over and over again as I brush away (drips running down my arm), and that eventually they become associated in my head with a particular wall colour or room or, in this case, a set of bookshelves. Have put on a couple of coats of a stinky tint called 'Bounding Main' and have ended up listening to a good deal of Regina Spektor (Begin to Hope), Sarah Blasko (As Day Follows Night) and Charlie Parr (1922).  Lovely stuff.  Here's a sample.

Jaunting with The Stars My Destination

I don't often read Sci-fi, but Alfred Bester's The Stars My Destination was recommended to me last year (by someone who doesn't often read Sci-fi) and so I tracked a copy down.  Again, for one reason or another, I ended up ordering it from a second-hand bookshop in America, and was delighted I did because it has a wonderful smell to it.

The moment I removed the first layer of packaging, a rich aroma of pipe tobacco wafted out.  And with each layer that I peeled off, the smell got stronger.  It's not that I smoke, but there's something about the smell that reminds me of my grandad and all the tins of Old Flake and Golden Virginia in which he stored nails, screws, bolts, rivets, washers and so on when he was alive.  Every now and then I pick up The Stars My Destination and sniff it, and I travel back through time to his work-shed and I watch him at his band saw or at his lathe.  Sometimes the smell transports me across the Pacific to the bookshop I bought it from.  I imagine the owner sitting at a counter with a pipe in his mouth, surrounded by eccentrically stacked books, or the house of the original owner surrounded by a fug of smoke.
That aside, it is a lovely read.  One of those books I was keen to return to each day.  (Thank goodness, as I've had a couple of duds recently that didn't even make the page 40 mark.)  First published in 1956, it doesn't feel dated in any sense, which perhaps indicates that it will endure for a good time to come.  I hope so.

'In this pulse-quickening novel, Alfred Bester imagines a future in which people "jaunte" a thousand miles with a single thought, where the rich barricade themselves in labyrinths and protect themselves with radioactive hit men - and where an inarticulate outcast is the most valuable and dangerous man alive.'

Gully Foyle is a wonderful character and his quest for vengeance is a compelling story.
In other news, I put the finishing touches to the final edit of The Grease Monkey's Tale today.  Phew!  Off to the printers before long, I imagine.  This certainly isn't Sci-fi.  And quite different to The Snowing and Greening of Thomas Passmore.  More of a Romance-Thriller this time.
Have been listening to Leonard Cohen recently.  Enough to transport me back to undergraduate days at Kingston Polytechnic: staying up through the night, drinking and smoking too much (but never a pipe), walking along the banks of the Thames at sunrise, not having to go to work in the day... and thought I'd track down a 1970's version of Suzanne on YouTube for a little more nostalgia.
Posted by Paul Burman at 20:44 2 comments: