It's been an idyllic summer so far - hot days and still nights, walks to the beach, regular swims, afternoon siestas, the cooking of fine meals, the drinking of much wine... you get the picture.  However, I suspect that too much good living gets in the way of writing at times, and the heat certainly puts my brain into a slower, mushier gear, so while I don't wish to trade any of this for being hungry in a cold attic (no thank you very much), I am feeling under-productive at the moment.  Two or three hours of editing and rewriting, a bit of reading and painting, but not a lot more than this.

Never mind, I tell myself, this delicious holiday feeling won't last forever, and then, human nature being what it is, I'll be yearning to recapture it all over again. So I'm damned if I won't make the most of it whilst it's here!

One of the books I've read - well, a booklet really - was lent me by a friend who's a fan of crime writer Michael Connelly.  In it, Michael Connelly describes how he developed two of his key characters: Mickey Haller and Harry Bosch. Although I haven't (yet) read any of Michael Connelly's novels, I found this a fascinating study, partly because it's often interesting to see how other authors work and partly because Mr Connelly very clearly recalls and articulates almost every stage of how these particular characters evolved.

I think this booklet was won as a prize.  I'm not quite sure what my friend had to do to win it, but it was a neat get all the same.

Recent reads: War with the Newts by Karel Capek

War with the Newts by Karel Čapek (translated by Ewald Osers) is unfortunately one of those books I would never have come across if it wasn't for a little serendipity: I was introduced to it by a friend who had recently travelled to the Czech Republic, and who, whilst there, had decided to read a Czech novel or two.  That I hadn't heard of it before may be the result of ignorance on my part, but, regardless of that small matter, this book deserves to be even more widely known.
First published in 1936,  two years before Čapek's death at the age of 48, there's a classic timelessness about War with the Newts, even though the narrative voice comes across as a little dated at times - although this might also add to its charm.  Overall though, it possesses a number of exceptional qualities that remind me, at one and the same time, of Jonathan Swift's Gulliver's Travels, George Orwell's Animal Farm and Kurt Vonnegut's Cat's Cradle.  That these three novels satirise the political follies of mankind may give an indication of what War with the Newts concerns itself with.

'Man discovers a species of giant, intelligent newts and learns to exploit them so successfully that the newts gain enough skills and arms to challenge man's place at the top of the animal kingdom. Along the way, Karel Čapek satirizes science, runaway capitalism, fascism, militarism, journalism, even Hollywood, yet he presents all the events on a comically human rather than spectacular scale.'   Catbird Press edition

His astute portrayal of various national stereotypes certainly has relevance 70 years on, and the political insights he provides make it easy to see why the Nazi Gestapo named him Czechoslavakia's "public enemy number two."
Reading this was time well spent.  Very glad I was introduced to it.
Posted by Paul Burman at 13:03 No comments:

What a difference a couple of weeks away from the keyboard makes.  No routine, no expectations.  Love it.  I suspect I began to go sane for a while.

I printed out my first paper copy of Number Three just before Christmas, but didn't start editing it until two days ago.  That's not to say I wasn't thinking about writing though, because it seems I do my best reflective thinking whenever I remove the imperative to actually sit down and write.  (Creating a distance allows for greater critical objectivity?)  So, between sleeping off Christmas day lunch and Boxing day lunch, wandering down to the beach for a swim or two, catching up with friends and the like, I've been doing a fair bit of thinking about what I want out of Number Three, and have scribbled a few notes down on scraps of paper, book covers, the back of miscellaneous hands, edges of wine labels - whatever was lying around at the time.  Now to try and put some of those ideas into practice.
*
Upon discovering how intently I was talking to myself this morning, I told myself I was going banonkers - more banonkers.  Now there's a neologism: Banonkers - the state of having gone bananas and bonkers at the same time.   Except, in checking it out, I discover it isn't a neologism, but that Google has over 2,600 references to it.  Which means that a lot of people have gone banonkers before me.
*
During the break, we woke up one morning to find this fellow in our backyard. He was a black-nosed wallaby, I think, and about 40" or a metre from head-to-foot, though considerably taller when he was pushing himself up with that tail and those feet.  Quite curious at first, he got very bouncy very fast when he couldn't find his way out again.  About 45 kmh fast and about 6' bouncy, I'd say. 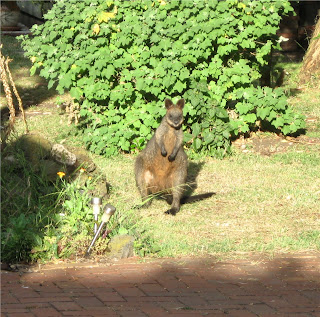 Also discovered this fellow on New Year's Day, all washed-up and dried out on one of our local beaches.  I think the New Year celebrations may have been too much for Percy the puffer fish, but at least he died with a grin on his face. 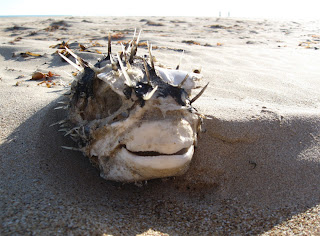