Following on from my last post, here's the Yewbert Blotter website link.  Saturday was a 40 degree day in Port, so the edges of my leaves had wilted a tad by the time I faced the Book Slam audience, but the adrenaline of performance lifted them a bit and I, at least, got a kick from reading Chapter 19 (Part Two) of Grease Monkey.  Had to dash straight after, unfortunately, not because it was inflammatory and I got chased off, but because I had another commitment.  Anyway, all the best to Yewbert Blotter.

I mentioned some time back how much I liked Jim Crace's novel Being Dead, and so recently followed up on this by reading Quarantine (Whitbread Novel of the Year, shortlisted for the Booker Prize).  It's a retelling of the 40 days and 40 nights in the wilderness story.  He's a fine storyteller is Jim Crace. Certainly makes me want to read another of his novels.

Along with a number of other writers, I'll be performing/reading/slamming at the inaugural Blarney Books & Art Book Slam this Saturday (from 7.30pm on 25th February, at Blarney Books & Art, Port Fairy).  It's a fund-raiser for Yewbert Blotter, a project that "has at its core a desire to give young people a fun and supportive place to create, to have confidence in themselves, and to learn more about themselves, their peers, and their artistic capabilities", which is A Very Good Thing as far as I'm concerned, and deserves all the support it can get. 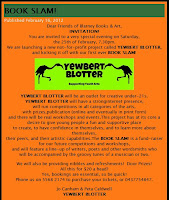 The modest sum of $20.00 will assure entry to this event, along with refreshments, door prizes, music, writers reading and, very possibly, the not-so-rare opportunity to watch me make an idiot of myself. Bookings, however, are strongly advised, if not essential, so phone 55682174 or 0437754847.

And while I'm mentioning Very Good Things, I recently learned about The Benjamin Andrew Footpath Library, which "aims to make books more accessible to the homeless and disadvantaged members of our society, change our attitudes to these people and encourage literacy."  It's looking for book donations, although it has strict guidelines about what's acceptable or not, which, I discovered, precludes me from sending a few copies of The Grease Monkey's Tale and The Snowing and Greening of Thomas Passmore (drug themes), but makes a few copies of Ten Journeys a possibility. 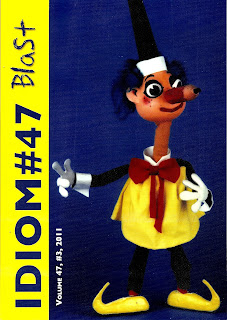 In other newsy stuff, I've just received a copy of Idiom#47, edited by Tony Thompson and Jan May, in which a piece I wrote last year appears: Up yours, George Bernard Shaw!  Several months later, I still reckon it's an honest piece of writing and, though I don't often write non-fiction, I enjoyed putting it together.  Now to read some of the other articles.
Posted by Paul Burman at 20:48 3 comments:

I've recently been catching up with Ardie Collins, whose novel Cult Fiction was published in 2011, but who also spent the year writing a song a day for his self-inflicted Cooper365 project.  Not much point in writing any more here for the moment as I press-ganged Ardie into writing about it for The View From Here here.  So go visit.

Few things happen quickly in the book world.  The gestation period of a novel, from conception to completion, is usually measured in years rather than months and, though e-publishing may change this, the process of getting a book into the marketplace isn't much quicker, if and when publishers get involved.  Similarly, an author might think there's no longer any interest in something they wrote, when it's been out of print for several years, only to find that's not the case.

Take Paulo Coelho's The Alchemist.  Written in 1987 and published by a small Brazilian publishing house, with a limited print run of 900 copies, Coelho later sold the rights to a larger publisher who turned it into a Brazilian best-seller.  Since then, it's grown into a world best-seller, translated into 67 languages and has sold many millions of copies.  Film rights for The Alchemist weren't purchased until 2004 - some 17 years after first publication - and, even then, filming came to nothing... until the rights were again sold on in 2008, although (4 years later) the film is yet to appear. 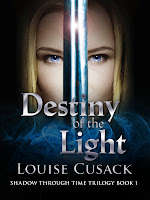 All this by way of saying that things are slow in the publishing industry and you just can't tell when a book is going to rise from the ashes and live again.  Which, in turn, is a roundabout  lead-in to giving a shout-out to Louise Cusack, whose fantasy trilogy Shadow Through Time is about to be re-released after being out of print for some time.  First published by Simon & Schuster 10 years ago, Pan Macmillan's ebook division, Momentum Books, will be releasing the digital version on 15th February.  She is understandably ecstatic, and you can read about the journey of the trilogy at Louise's website, where you can also pre-order the books.

While I'm shouting and congratulating about the place, congratulations to Jason Nahrung, who I've also mentioned here before. Jason's novella Salvage is being published by Twelfth Planet Press, and can be pre-ordered here, where you'll be able to read what it's about.  (And ain't it great, by the by, to see more and more publishers investing in novellas?)
Posted by Paul Burman at 19:18 3 comments:

I was handed details of the Questions Writing and Photography Prizes for young Australians (under 23) yesterday, and thought them worth passing on.
Writing submissions can be fiction or non-fiction, between 1500 and 2000 words on any topic.  The prize is $2000 and publication.  Closing date is 1st July, 2012.
Similar prize and closing date for photography.
There's also a Future Justice Prize, recognising leadership and initiative of individuals or organisations.

Listening to: Playing for Change - Songs Around the World

After being introduced to this YouTube video of Playing for Change - Songs Around the World - I was given the CD, and have been playing it pretty heavily.  It's great music and a tremendous concept: musicians from around the world contribute to the recording of ten classic songs.  The video sums it up superbly.  This has to be one of the best recordings of Stand By Me.