It's that time of year.  The summer holidays are almost here, along with Christmas and the New Year.  I've been delighted to see there's been a small run on both The Snowing and Greening of Thomas Passmore and The Grease Monkey's Tale over at Amazon of late, in time for Christmas presents or holiday reading, so I'll raise my glass and say Cheers to that. Of course, Snowing and Greening is very much a winter's tale, while Grease Monkey turns much of that on its head, so hopefully there'll be something for all, whether about to celebrate Christmas and the New Year through a southern summer or through a northern winter.

I'm taking a break from Blogdom for a couple of weeks, but would like to thank you for dropping by and say thanks for buying my books.   Here's wishing one and all, a merry Christmas and a happy New Year.


May your days be many and your troubles be few;
May those you love always love you too. 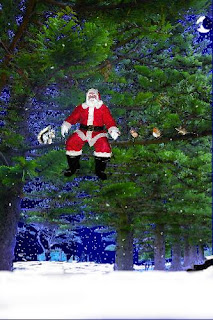 Inside the Express packet is a white envelope and inside the white envelope a Christmas card.
page 224 The Snowing and Greening of Thomas Passmore
Posted by Paul Burman at 11:32 2 comments: 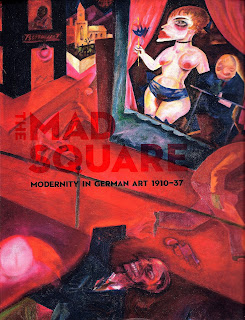 As an 18 year-old studying for my Art and History of Art 'A' levels, I admired the work of George Grosz, Otto Dix, Wassily Kandinsky, Rudolph Schlicter... many of the artists who've since been lumped together as German Expressionists, but who also became directly or indirectly involved with Dada, Bauhaus, and the like - post-World War One, post-Blue Rider and all that.  For a while I tried drawing like some of them, and held onto one piece that was clearly influenced by the likes of Grosz, Max Beckmann and Georg Scholz .  (Took it out and dusted it down today, then promptly hid it back in my folio again.)  It suited the person I was at that time, and aspects of the world I saw about me. 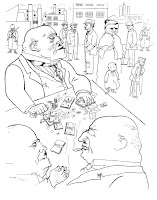 'Under my rule, it shall come to pass ... in this livery will I clothe ye.' from The Robbers portfolio, George Grosz, 1922

I was delighted, therefore, to be in Melbourne recently, shortly after an exhibition, which celebrates "modernity in German art" and places it in its historical perspective, was opened. The Mad Square features an impressively broad range of work, from Franz Marc, Rudolf Belling, August Sander, El Lissitzky, Erich Dieckmann, to name just a few.  The period from 1910-1937 is presented in paintings, prints, photogaphs, collages, films, sculpture, furniture, and well worth a visit if you're in Melbourne. It runs until 4th March 2012.

So many wonderful pieces.  By way of giving a taster, here are two of my current favourites: 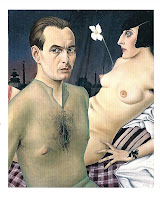 Down at the Factory of the Imagination in November

Last report had Number Three novel at 67,000 words.  This report has it at 74,000.  That's not too bad, although a tad behind where I was hoping to be by this point in the year.  I had hoped all the words would be down, roughly in place, and that I'd be engaged in some glorious editing by now, but I'm not quite there yet.  Another ten thousand words should do it though.  However, the closer I get to the end of a project like this, the more frequent and more pronounced the self-doubts become.  The best antidote to this is in telling myself that every draft is a rough draft, and that it's the polishing that really counts.
Writers delight, it seems, in developing metaphors that describe the process of writing, and I've been likening where I'm up to recently with the sinking of a mine shaft (without the environmental damage).  Having invested a couple of years of time and creative energy in developing this manuscript because I believed the initial workings/the exploratory drilling looked promising, I sometimes worry that when I actually get to where I need to be with it there'll be nothing of value - nothing that I value.  No gems to polish, just a slag heap of ideas. 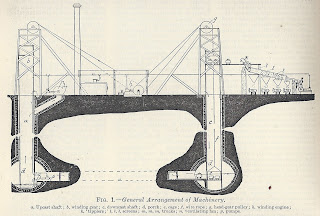 This being Number Three though, I remind myself that I felt exactly this way with Snowing and Greening and Grease Monkey too.  Ho hum.  Onward and downward.  Be sure and steadfast, and all that.  Let's hope thar's gold in them thar hills.
Posted by Paul Burman at 11:36 No comments:

Another Earth directed by Mike Cahill

It was slashing down with rain when I was in Melbourne recently and, having already got a tad damp heading to the NGV, it seemed like a brilliant idea to spend a couple of hours in the cinema - the Nova in Carlton, no less. Another Earth was on the billing, and what little I'd read about this recent release intrigued me.

This was my first time in Nova, and I thought it an enjoyably retro experience - spot on for a wet, Saturday afternoon.  In fact, the young American couple who'd found their seats in the auditorium before us must have felt something similar, because they were busying themselves photographing the fixtures and fittings until we arrived, and then they cheered for no longer being the only patrons. 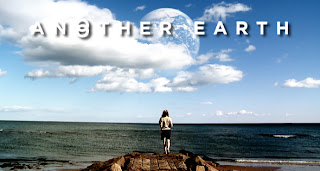 I thought we'd entered the wrong auditorium and were about to get another film at first,  because it seemed as if we were being shown the Another Earth preview - about the appearance of another planet, very close to Earth - except it was more depressing than I'd expected.  Wasn't sure what we were going to get instead - not Cars 2, I hoped.  Until it transpired that the preview was for Lars von Trier's Melancholia.

Another Earth is the feature film directorial debut of Mike Cahill, who co-wrote it with Brit Marling. She also stars in it, alongside William Mapother.  Great performances by both.  It tells the story of Rhoda Williams who, as a high school student out celebrating with friends, is driving home when she hears a radio report about the appearance in the night sky of another planet, which is, to all extent and purposes, the very image of Earth.  She catches sight of the planet, is mesmerised by it, and crashes head-on into the stationary car of Yale music professor John Burroughs, killing his pregnant wife and young son instantly.

Because she is under the influence of alcohol, Rhoda serves a prison sentence (thereby ending her prospects of becoming an astro-physicist and exploring the nature of the universe!), and the main body of the film picks up with her release 4 years later, telling a story of grief, loss of innocence, and the painful search for redemption.  If that sounds too depressing in itself, be assured that there is an energy and ambience about the film, and the portrayal of all the characters, that makes it compelling and ultimately life-affirming.

While the presence of the additional Earth adds some interesting elements to the story, this is not Sci-fi, and the storyline does not over-concern itself with too much pseudo-scientific justification of this - or the logical ramifications of it.  Another Earth affects towards Arthouse-on-a-small-budget, down to the scratchiness and muted colours of the film (although this might equally have reflected the age of Nova's projector) and the hand-held camera work, which I found irritating for a few minutes, although on the whole these combined characteristics add rather than detract from the experience.  On those occasions when I could suspend disbelief no longer and wanted to raise concerns about some of the logic flaws (particularly with the outcome), I found it useful to remind myself that the parallel Earth idea is, more than anything else, an effective device to explore a few interesting existential questions - a bloody big metaphor floating in the sky.  Namely, how we each choose to live our life, the ways in which we respond to regret, self-forgiveness, the notion of the life we would like to have...

Well worth watching.  Even more so on a wet afternoon.