Hurumph!  Earning a living gets in the way of writing.

The Green Man a.k.a. Leafy George

It's been a while between blogs because we've had a few visitors to the Burman place recently, which always involves considerably more eating and drinking than usual, on the one hand, but less opportunity and motivation to sit at a keyboard, on the other.  In fact, there's probably a Maths or Physics law to describe the inverse relationship between the two events: as the amount of time and energy spent on eating and drinking increases, so does the amount of time and energy spent on all other activities proportionally decrease - something like that.
Anyway, I was taking 20 minutes away from being a charming and sociable host yesterday, and ended up having an E.M.Forster moment. 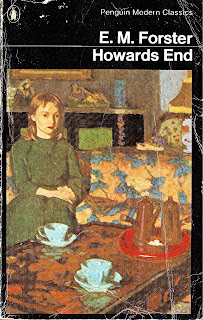 I remember reading of E.M.Forster's surprise when he learned that Rooksnest - the house he grew up in, and which he used as the setting for Howards End - had, before the Forsters moved in, been known as Howards for many years.  Instead of creating the name from his imagination, his subconscious had dredged it from forgotten memories (if that isn't a contradiction in terms).
Which is similar to my moment.  In writing The Snowing and Greening of Thomas Passmore, I thought I'd had little connection with or knowledge of The Green Man (also known as Leafy George) prior to researching this motif for the novel in the early noughties.  However, as I was sifting through a box of cards that I'd collected many years ago, which I hadn't properly looked at since emigrating to Australia 21 years ago, I came across a Christmas card with this wonderful image that must have been loitering in a corner of my subconscious all that time.  Handwritten on the back of the card is the following credit: Green Man by Aysha © 1986 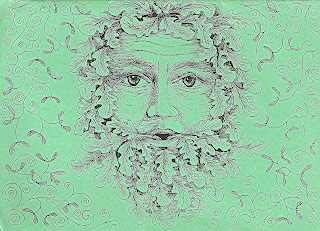 Recent reads: In the Miso Soup by Ryu Murakami

While I've raved often about the work of Haruki Murakami, a friend (visit his blog) suggested I try Ryu Murakami and, for starters, In the Miso Soup.

'It's just before New Year, and Frank, an overweight American tourist, has hired Kenji to take him on a guided tour of Tokyo's nightlife.  But Frank's behaviour is so odd that Kenji begins to entertain a horrible suspicion: his client may in fact have murderous desires.  Although Kenji is far from innocent himself, he unwillingly descends with Frank into an inferno of evil, from which only his sixteen-year-old girlfriend, Jun, can possibly save him.'

This is a relatively short, three-part novel (180 pages), and it's fair to say that my responses to it changed with each part.  Part One captured my attention largely because of the descriptions of Tokyo nightlife; Murakami takes the reader on a neon-illuminated  tour of Tokyo's seedier nightclubs and peepshows, providing us with an intriguing view of the sex industry - at least, selected aspects of it - before leading us to a baseball batting centre ('a surreal open space illuminated by fluorescent lights'). As for the characters leading this tour, I felt  unconvinced and irritated by Kenji's intuitions about Frank's murderous nature, and wished that he'd stop his whining and get on with the job he'd taken or abandon the unlikeable Frank and go find, Jun, his girlfriend. 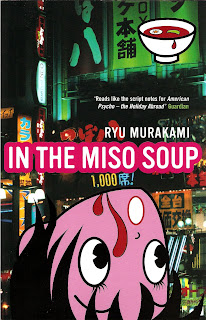 In Part Two, with blood pooling at the edge of each page, we meet the darker side of Frank.  Though it felt like overkill to me in every sense, and I nearly finished with the book on a couple of occasions, it was towards the end of this part that Kenji's inability to detach himself from events began to pique my interest.

However, the third and final part completely won me over and made me glad I stayed for the entire macabre experience.  Frank and Kenji came fully alive for me and I found myself wanting to find out what was going to happen to them.  (It's when I just don't care that I know a novel hasn't worked for me).

What added considerably to my appreciation of this novel, though, is that, by chance, I followed my reading of it with Robert Louis Stevenson's Gothic horror Strange Case of Dr Jekyll and Mr Hyde.

The similarities between Frank and Mr Hyde are startling, despite one being large and the other being 'dwarfish' and 'troglodytic'.  They are both malformed, malevolent and given to murderous rage, and there are qualities about their appearance (the feel of Frank's skin, the foul soul that ... transpires through, and transfigures, [Hyde's] clay continent) which both narrator's find difficult to pin down and articulate. Kenji is a modern Mr Utterson, although the path he travels is much more perilous.

All up, In the Miso Soup is a novel I'm glad I read, and I'll be picking up another Ryu Murakami before too long. 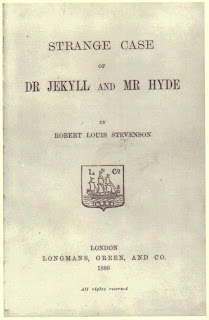 New article for The View From Here

It's been a few months since I wrote anything for The View From Here, so thought I should get my two fingers out (you'll see what I mean) and write something.
You can read What every chicken should know about Cupertino here.

Listening to The Waifs

Have been listening to a fair bit of The Waifs recently.  They've been a favourite Australian band of mine for many years, but I've been giving their CDs a renewed hammering of late.  Songs I particularly like are The Haircut, Service Fee (both from Sink or Swim) and the slow version of Without You (from sundirtwater).  Having painted those lighthouse steps recently (see second last post), thought this might be appropriate: Lighthouse.

Down at the Factory of the Imagination in July

Some might say all's not well down at the Factory of the Imagination, on account of there having only been 5,000 words added to Number Three novel this month, instead of the 10,000 target (see previous post).  And yet it feels as though I've written four times that amount ... at least.  Honest guv.
Let me assure you, the cogs have not been idle; there's been no strikes, no working-to-rule nor go-slows in this factory.  I've been labouring over a transition sequence from one main course of the story to the next, but it seems to have taken forever-and-a-day. 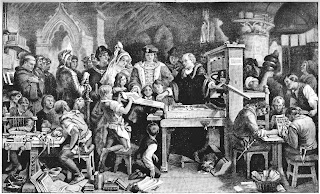 I was wondering how to explain this shortage of finished words, during a rare lunch break, and found myself wandering into the kitchen of the Works Canteen.
Cook was reducing a sauce, to serve with the day's speciality: Bœuf à la Métaphore.  To make the sauce, the carcasses of ten Aberdeen Anguses (grazed on a diet of organic grain, stout and whiskey) had been boiled in several casks of red wine to form a vat of rich broth, which, over a period of three days, was being reduced to the amount of two and a half cups.  Although I'm a vegetarian, and Cook likes to spit at me for this, I was assured that, so potently delicious is it, that a mere sniff of the finished sauce would instantly repair my damaged soul and convert me into a raging carnivore once more. 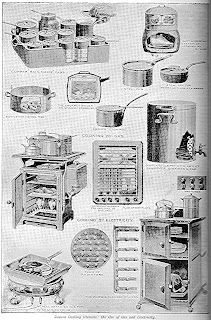 This, I realised, is what I'd been attempting to do with words across the last four weeks.  I'd write a few hundred, and then reduce those to fifteen or twenty, and then, on the following day, I'd further reduce them to seven or eight.  I'd struggle to dice in another couple of hundred words, but would then start stirring them around again, simmering over them, until only a thimbleful were left.  And so on and so on.  What feels like 40,000 words reduced to 5,000.
And there I have my excuse. My explanation.  Surely I deserve a bonus, instead of getting my pay docked?
Burnt gravy, anyone?
Posted by Paul Burman at 20:17 No comments:

Winter weekend, art, and a competition

This coming weekend sees another of my home town's Winter Weekend celebrations.  Throughout the winter months, every year, Port Fairy hosts a number of events, except I've gone and got myself involved this time.  I didn't mean to.  It just sort of happened.
While you can see the range of events taking place for this culinary-inspired weekend here, I rashly agreed to participate in the Smorgasbord of Port Fairy Art exhibition - a mosaic of paintings, depicting fragmented scenes of the town, which will be the subject of a competition (guess the layout of the mosaic).  Twenty local artists were invited to choose one of twenty photos as the basis for a  small painting (40 x 30cm), which will then be arranged as a mosaic.  The photos, as chosen by each artist, can be found with details of the competition here, but that's my photo above.
I must confess, this has caused me some angst and I would have destroyed my effort several times over if I hadn't made a commitment.  It may have been significantly smaller than the piece I put together for this year's Biblio-Art Exhibition (and I blogged about that and my nod to Jeffery Smart right here), but I found this one considerably harder.  Nonetheless, I learned a bit along the way and played around with different brush strokes, so, while I wouldn't hang it on my wall, I'm happy to pin it up here for the time-being.